"What an incredible honor," says Jeremy Conroy, General Manager of Hilton Garden Inn Annapolis Downtown, who picked up the President's Award during the Business Hall of Fame Gala. "We are thrilled to be part of the thriving business community in the Annapolis Arts District."

Hilton Garden Inn Annapolis Downtown represents an extensive redevelopment effort by Spartanburg SC-based OTO Development, which is part of The Johnson Group. The company partnered with Palmar Construction of Herndon VA and design firm //3877 of Washington DC on construction and design of the award-winning project.

This new Hilton Garden Inn, which opened in April 2018, is the result of a total upfit of the old O'Callaghan Hotel. As the first Hilton property in the Annapolis central business district, it was designed to add momentum to West Street's emergence as a cultural and culinary destination.

"Rather than simply being IN downtown Annapolis, we wanted to create a hotel that's truly OF this historic city," says Corry Oakes, President/CEO of OTO Development. "The façade was re-imagined to better complement its centuries-old architectural neighbors. Inspiration for the interior design came from the city's rich naval history. Our original restaurant concept adds local flavor - a touch of Annapolis flair - to both food and drink."

Guestrooms feature custom wallcovering echoing a 1924 blueprint of the U.S. Naval Academy, for example, while lobby spaces incorporate antiques and books sourced from local merchants. A suspended installation of metal "birds," hung at varying heights, creates a three-dimensional image of a boat and waves. This piece - crafted by avid sailor James Strickland and curated by Indiewalls of NYC - references Annapolis' status as the sailing capital of America.

Part of OTO Development's portfolio of owned hotels, Hilton Garden Inn Annapolis Downtown is located at 174 West St. The hotel comprises 121 guestrooms, including two executive suites with outdoor terraces and eight balcony rooms, along with 1,665 square feet of meeting space. An on-site restaurant, Kitchen on West St., offers indoor and outdoor seating for breakfast and casual dinner along with a specialty menu of beer, wine and crafted cocktails. The arts district hotel is within walking distance of the Maryland State House, government offices, shopping and dining, and less than a mile from the United States Naval Academy and Navy-Marine Corps Memorial Stadium. 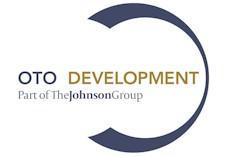