Rebecca Tillman has been named Executive Chef at LON's at the Hermosa, announced Stephen Ast, Managing Director of The Hermosa Inn, a AAA Four Diamond luxury boutique hideaway in Paradise Valley, Arizona. Renowned for its globally inspired Arizona fare, the critically acclaimed LON's at the Hermosa is the culinary centerpiece of the hotel and is complemented by a subterranean wine cellar, a celebrated outdoor dining patio, and its bar and casual dining counterpart: LON's Last Drop.

"As I considered LON's longstanding history and tradition and imagined adding Rebecca's culinary passion and experience; I knew immediately that she would be the chef who would provide guests an even greater dining experience," said Ast.

Since 2017, Tillman has been the Executive Sous Chef at The Phoenician, where she specialized in creating menus showcasing farm-focused fare for all of the property's award-winning venues, including the Forbes Five-Star/AAA Five Diamond Canyon Suites. Named ‘Manager of the Year' due to her passion for distinctive cuisine and exceptional service, Tillman, alongside the executive chef, led culinary operations for the entire AAA Five Diamond resort including banquets and was responsible for the menu development and financial management of the five à la carte restaurants. Additionally, Tillman was integral in concepting and reopening several of the resort's restaurants, including Mowry + Cotton, The Phoenician Tavern and The Marketplace.

Over the years, Tillman has built an impressive culinary resume, working with many renowned hospitality establishments. She served as the Executive Chef at the Biltmore House and Executive Sous Chef at the Inn, both on the legendary Biltmore Estate in Asheville, North Carolina, where she led culinary operations revered for their farm and field-to-table programs. With estate pastured beef and lamb, plus a bounty of vegetables, herbs and fruit grown in the Biltmore's expansive production garden, Tillman created menus with a tremendous sense of place that celebrated sustainably raised seasonal ingredients and locally sourced products. With 8,000 acres of spectacular gardens, mountain views and historic buildings, Tillman oversaw the culinary operations for an expansive array of indoor and outdoor catering venues and seasonal events, including concert series and their legendary Christmas extravaganza.


As Executive Sous Chef for the iconic Destination Kohler - The American Club, a Forbes Five-Star and AAA Five-Diamond luxury resort and spa in Kohler, Wisconsin, Tillman led the culinary operations for three highly-rated restaurants, the AAA Five Diamond Kohler Waters Spa, The Carriage House (60 room boutique hotel), and The Craverie, a French style bistro where Kohler Original Recipe Chocolates are made. Renowned for gracious hospitality for 100 years and for its commitment to supporting local artisans, farmers, vintners and brewmasters, Tillman planned and organized the Kohler Festival of Beer and the Kohler Food and Wine Festival, the largest in the Midwest with more than 10,000 attendees annually.

As Executive Chef at Pointe Hilton Squaw Peak Resort in Phoenix, Tillman led the culinary operations at the 27-acre, 564 room resort where she upgraded the existing restaurants and re-concepted Rico's American Grill, from standard American fare, to seasonal farm-to-table with an emphasis on utilizing a newly-created urban garden attached to the hotel. She began her resort career at the Arizona Biltmore.

Tillman studied Hospitality Administration at Northern Arizona University and earned her Culinary Arts degree from the Art Institute of Phoenix. Active in the culinary community, she is a member of the nationally recognized program, "Chefs in School," which brings chefs to educational institutions around the country to teach children about food and cooking in a fun, appealing way. Tillman is a culinary mentor for Careers Through Culinary Arts Program (C-CAP), which helps prepare students for college and careers in the restaurant and hospitality industry, and is also a member of the philanthropic organization of women leaders in the fields of food, fine beverage and hospitality: Les Dames d'Escoffier International. 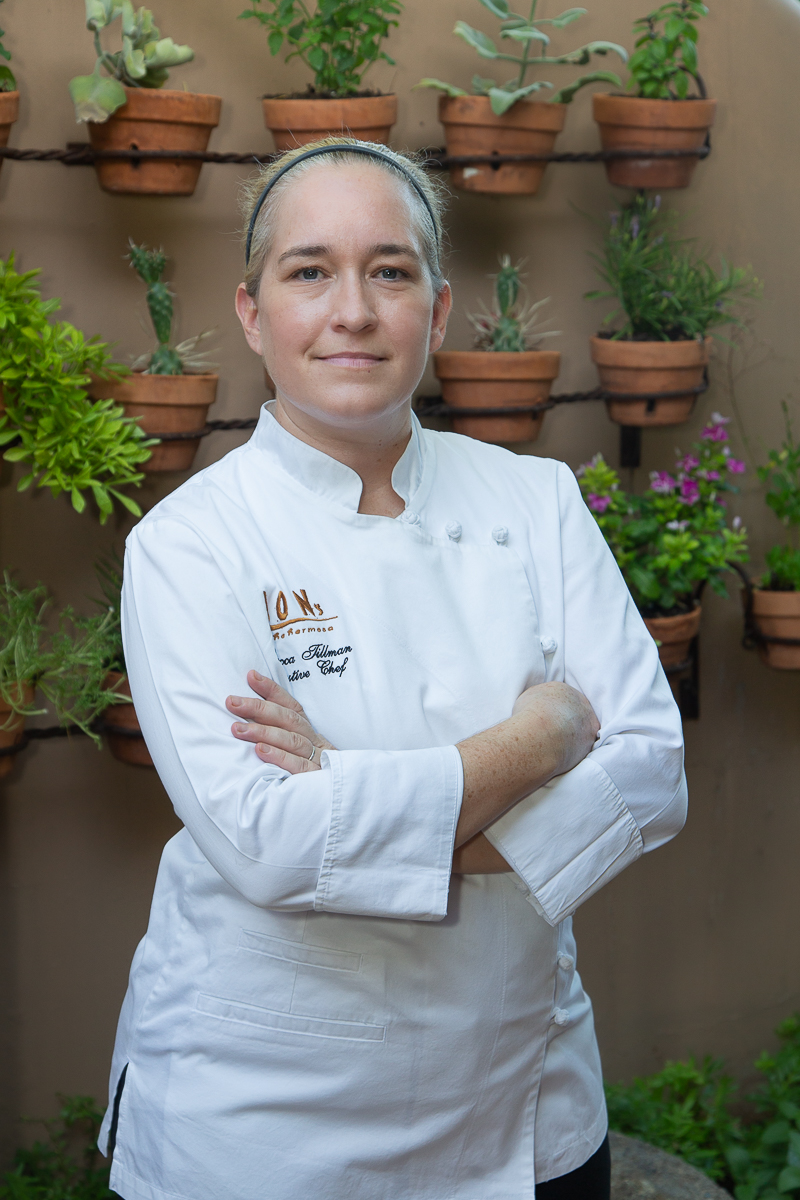 About The Hermosa Inn

Ranked in the Top 10 Hotels in the U.S. and the #1 Hotel in the Southwest & West in Condé Nast Traveler's Readers' Choice Awards in both 2017 and 2018, the AAA Four Diamond Hermosa Inn is a jewel of a hideaway surrounded by an exclusive neighborhood in Paradise Valley, and just minutes from Scottsdale and its many attractions. Handcrafted in the 1930's by cowboy artist Lon Megargee as his residence and art studio, the Inn's adobe architecture has maintained its "authentic Arizona" character and charm which was instrumental in winning the 2019 Stella Award, the seal of excellence in the meetings industry, for Best Boutique Hotel in the Southwest Region. The 43 luxury guest casitas are nestled in a garden setting with breathtaking vistas of the lush desert and Camelback Mountain. Accommodations reflect the southwestern design of the original Casa Hermosa (beautiful house) and most include deep soaking tubs, beehive fireplaces and private patios, which have been praised in the 2019 TripSavvy Editors' Choice Award for Romance and featured in the Hideaway Report, the highly curated site for exceptional experiences around the globe. The culinary centerpiece is LON's at the Hermosa, a AAA Four Diamond restaurant honored by Food & Wine magazine as Arizona's Most Romantic Restaurant, serving globally inspired Arizona fare. A recipient of Wine Spectator's 'Best of Award of Excellence', the restaurant is complemented by a subterranean wine cellar, a celebrated outdoor dining patio, and its bar and casual dining counterpart, LON's Last Drop, named after one of Megargee's iconic paintings, many of which are displayed throughout the resort. For more information, visit HermosaInn.com or call 602.955.8614. To become a fan, visit us on Facebook at www.facebook/HermosaInn, follow us on Twitter at www.twitter.com/HermosaInn or share with us on Instagram at www.instagram.com/HermosaInn.