In March of 2020, Chef Michael Mina's Bourbon Steak Orange County celebrated its second anniversary. Named the #1 Restaurant in Orange County in 2018, and #2 in 2019 by Orange County Register critic Brad A Johnson, the acclaimed steakhouse, complete with panoramic views of the Pacific Ocean, is considered a crown jewel in Dana Point. After the statewide mandate for restaurant closures, Bourbon Steak has reopened with expanded outdoor dining overlooking Monarch Beach Resort's Grand Lawn. Now, the critically acclaimed restaurant enters into its third year with the promotion of their new Executive Chef, Chris Sanchez.

Chef Chris, who most recently served as the restaurant's Executive Sous Chef, opened Bourbon Steak Orange County in 2018 and helped lead the restaurant to incredible success during its first two years. His journey with the Monarch Beach Resort began back in 2010, formally known as The St Regis Monarch Beach, working as a sous chef for the premier property's various outlets. Before joining the resort's culinary operations team, Chef Chris worked at some of Orange Counties most prestigious culinary locations, such as Patina Group, Marche Moderne, and the Disneyland Resort.

"It's an honor to build upon the success we've earned at Bourbon Steak Orange County in my new role as Executive Chef," comments Chef Chris. "As a premier MINA Group restaurant, we operate with a sense of kaizen - which translates to ‘improvement.' Now, more than ever, we look to make the necessary adjustments during this COVID 19 pandemic in order to preserve the sanctuary we have built, without sacrificing the experience we deliver. The safety and well-being of our team and our guests is of the utmost importance and we look forward to embarking on this new journey together."

Monarch Beach Resort has launched the StaySafe Program encompassing cleanliness, sanitization, and physical distancing standards for the wellbeing of guests. Monarch Beach Resort's safety protocol has been informed by the public health & epidemiology experts at the University of California Irvine. Per State of California guidelines, Bourbon Steak Orange County and all restaurants at Monarch Beach Resort are offering outdoor dining and to-go service, with indoor service temporarily suspended. For details on StaySafe, visit our website. 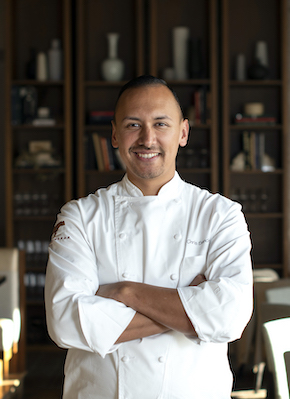 Monarch Beach Resort, Orange County, California, is a AAA Five-Diamond awarded luxury resort recognized among the best in the world, with panoramic views of the Pacific Ocean and 400 exquisitely appointed guest rooms and suites. This resort, nestled along the coast in Dana Point, features the Robert Trent Jones-designed Monarch Beach Golf Links, a 2016-2017 Gold Medal Resort by Golf Magazine; private access to one of the most coveted beaches in Southern California; three luxurious pools; six ocean-view restaurants; and the distinguished Miraval Life in Balance Spa. Visit https://www.monarchbeachresort.com/