Chart-Topping Country Music Stars Lee Brice, Tyler Farr and Pryor & Lee announce they will be performing at Hilton Daytona Beach Oceanfront Resort's New Year's Eve Beach Bash vertical concert series produced by Vivid Sky Vertical. The first of its kind, the vertical concert will allow up to four patrons per room to enjoy the show physically distanced from the safety and comfort of their hotel room balconies with an extensive food and beverage package and overnight oceanfront accommodations included in the ticket price. The concert will kick off at 8 p.m. on December 31, 2020 and end at midnight to ring in the new year.

"We are thrilled to be working with Vivid Sky Vertical to bring a fresh new event to the Daytona Beach area featuring three national country acts," said Jim Berkley, General Manager Hilton Daytona Beach Oceanfront Resort. "Our resort will be engaging in Hilton CleanStay protocols creating a safe space for our guests to get together and enjoy a great show with extensive food and beverage options crafted by our award-winning culinary team."

The New Year's Eve Beach Bash is sponsored by Southern Glazers Wine & Spirits, 93.1 Coast Country, Tanger Outlets, and Pepsi with a portion of the proceeds benefiting the Boys and Girls Clubs of Volusia/Flagler Counties.

Tickets for the New Year's Eve Beach Bash start at $125 per person and are tiered based on line of sight to the stage with VIP sections featuring premium views of the show, alcohol, dining and hotel stay included in the package, all tickets are available online here. For more information about the event, visit the hotel's website.

When Curb Records recording artist, Lee Brice, isn't selling out arenas, writing and recording songs, or building new brands like American Born whiskey, you'll find the family man with his wife Sara, two young boys, and daughter. Meanwhile, with over 2.3 billion on-demand streams, and three billion spins on Pandora, Brice continues to enjoy massive success at country radio, digital streaming services, and on the road. He went to #1 at Country Radio with his fastest rising single to date, "One of Them Girls," which follows his #1 with Carly Pearce on "I Hope You're Happy Now" and his #1 just prior to that, "Rumor," which was nominated in the category Single of The Year at the 55th Annual ACM Awards. One of the most-played country artists of all time on Pandora, he is a member of the company's "Billionaires Club," becoming only the second country artist behind Keith Urban to receive the Pandora Billionaire plaque. Lee is also a GRAMMY nominee, a CMA and ACM award winner, and he's taken eight radio singles to Number One: "A Woman Like You," "Hard to Love," "I Drive Your Truck," "I Don't Dance," "Drinking Class," "Rumor," "I Hope You're Happy Now," and "One of Them Girls." Garth Brooks, Jason Aldean, Kenny Chesney and others have recorded his songs, and he's performed on numerous TV shows, including NBC's Today, ABC's The Bachelor, NBC's The Voice and FOX's Miss USA 2018. Lee performed as part of the Library of Congress Gershwin Prize for Popular Song honoring Garth Brooks, aired on PBS March of 2020. At this year's 54th Annual CMA Awards, Lee took home the prize for Musical Event of the Year for his song with Carly Pearce, "I Hope You're Happy Now" and most recently released his fifth studio album, Hey World.

"One of the best male vocalists in Country music today," (Taste of Country), Tyler Farr is the first artist signed to Jason Aldean's Night Train Records/BBR Music Group. The Country-rocker, with three No.1 songs to his credit ("Redneck Crazy," "Whiskey in My Water," and "A Guy Walks Into a Bar") broke onto the scene with the 2013 release of his debut album, Redneck Crazy, which landed at No. 2 on the Billboard Country Albums Chart and #5 on the Billboard Top 200. Farr's platinum-selling title-track "Redneck Crazy" projected Farr forward to celebrate back-to-back No. 1 singles, including his first No. 1 as a songwriter, with his Platinum-certified hit "Whiskey in my Water." His sophomore album, Suffer In Peace followed suit, also making its debut in the Top 5 on both the BILLBOARD Top 200 Albums and BILLBOARD Country Albums Charts, leading Farr to become the only solo male Country artist in the past decade to have their first two studio albums debut in the Top 5 on the Billboard 200 Chart.

Recognized as a 2014 CRS New Faces of Country Radio and 2014 Music Row "Breakthrough Artist of the Year" nominee, the opera-trained singer quickly earned coveted slots touring with Jason Aldean, Florida Georgia Line, Brantley Gilbert, Luke Combs and Lee Brice. The Missouri native's dry wit, silly antics and reputation as "a no-frills musician who pours his drinks as hard as he pours his heart into his songs," (Rolling Stone), lead to Farr to receiving his own reality series A Little Too Farr (Unscripted) and a social following eager to see his next move. Farr is currently working on new music with longtime friend, Jason Aldean serving as a producer for the forthcoming project alongside Kurt Allison and Tully Kennedy (Aldean's guitarist and bassist, respectively). His new EP Only Truck in Town is available digitally now.

Black River Entertainment recording artists Pryor Baird and Kaleb Lee first met in 2018 as contestants on the 14th Season of The Voice. Then solo acts, the singers were paired as roommates during the Blind Audition, and a friendship instantly bloomed. Now teaming up as a duo, Pryor & Lee introduce themselves to the country genre with its debut single - the feel-good arena anthem "Y'allsome." Penned by ace songwriters Rhett Akins, Marv Green and JT Harding, the boot stomping ode to country fans exemplifies Pryor & Lee's fun side and dynamic live show. In December 2019, the pair split the bill for a studio session to record "Blame Me," a hard-hitting country tune that has a man owning up to his faults. Black River heard the song and quickly signed the men to a record deal in January 2020. Pryor & Lee look up to acts like Brooks & Dunn and Montgomery Gentry for their authentic lifestyle, vivid storytelling and deep-seeded country roots. Not unlike Brooks & Dunn - who also formed as a duo after pursuing solo careers - Pryor & Lee has carved out a path of its own with a distinct throwback country vibe and unmistakable talent.

Born out of a passion for concerts and need for safe, distanced, yet high-quality events Vivid Sky Vertical brings world-class entertainment in a responsible and safe way. Their mission is to make every hotel room feel like a VIP Room. Featuring a custom designed sound, lighting, and video system that ensures that all rooms sound exceptional, feel luxurious, and receive an unforgettable experience. The Vivid Sky Vertical team is composed of seasoned veterans in the concert and hospitality industry. With Vivid Sky Vertical's unique experience you will be part of the next generation of festival and concert performances. For more information, visit VividSkyVertical.com. 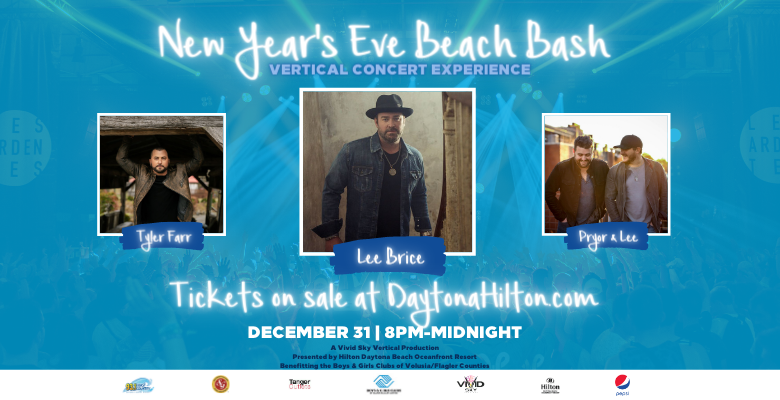 Located in the heart of Daytona Beach and steps away from the city's best oceanside shopping and visitor attractions, Hilton Daytona Beach Oceanfront Resort is a family-oriented and pet-friendly property offering world-class amenities on Florida's famed Atlantic coastline. The hotel is home to 744 rooms including 32 suites and 30 beachfront cabana suites, as well as two resort-style pools, beachside cabanas, a spa, gift shop, fitness center, seasonal events, kid-friendly activities and several premiere restaurant and bar venues for every taste. In addition, Hilton Daytona Beach Oceanfront Resort offers more than 60,000 square feet of flexible indoor and outdoor space for meetings, weddings and other special events. For more information, visit DaytonaHilton.com or call 386-254-8200.